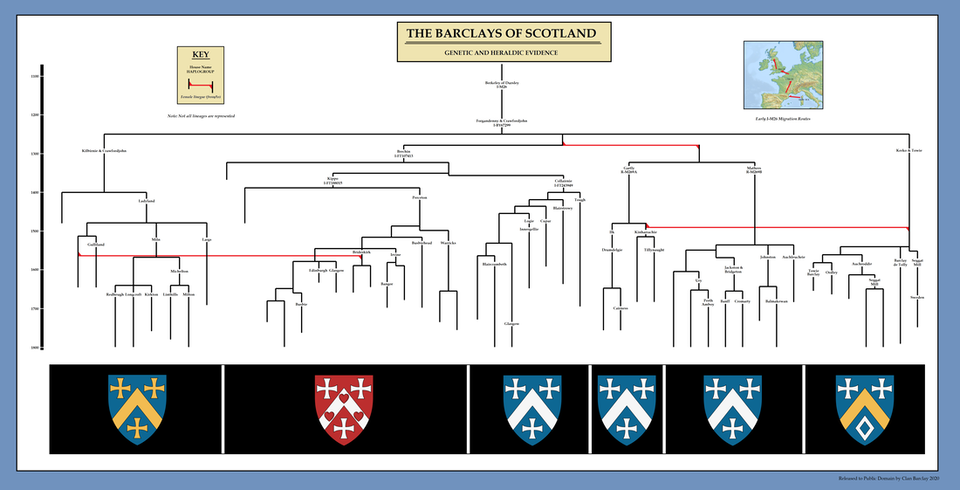 The Barclays of Scotland
Click Here for High Resolution Image of Chart ​ (Note that it will be updated as more informaiton is received.)
The seventeenth century is generally recognised as a period of great uncertainty for genealogical research. Surviving records of the general population at the time are few and those that do remain often lack the detail of later records. Given this, it is hardly surprising assumptions based on a combination of names, dates, locations, and associations, are frequently employed in an attempt to connect one’s ancestors with a better recorded family of the same surname. Often, the logic of such assumptions is indisputable. However, as numerous examples can testify, even the most logical assumption can be entirely incorrect.

The Barclay family occupies a somewhat unique position in genealogical terms. As members of the lower nobility, records of individuals from various branches are found frequently throughout Scotland in the pre- and post-sixteenth century eras. Their arrival in England in 1066 from Normandy is well recorded, as is their migration to Scotland in the twelfth and thirteenth centuries, all of which has been confirmed by DNA analysis. However, one result of such an ancient origin is the production of many cadet lineages, frequently confounding attempts by genealogists to distinguish between them. Often these are the same problems faced by the family historians of the nineteenth and twentieth centuries that produced what are now well-recognised as erroneous accounts.